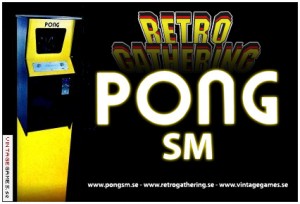 Pong is one of the major classic video games and is considered to be the reason for millions of people began to play video games nearly 40 years ago. Despite its age, Pong with its simple gameplay is a genious and excellent tournament game. Pong is the digital version of tennis, and every year at Retrogathering, we crown the Swedish champíon who becomes the digital equivalent of Björn Borg, Stefan Edberg or anyone else in the history of Swedish tennis champs.

The Swedish championship in Pong takes place on Retrogathering through a knock-out competition on an Atari Hockey Pong. Since 2015, the championship is played with small paddles and fast ball, to make a more exciting game.

The rules are simple. The Pong game is turned on by the tournament manager when both players are ready, upon which the game immediately begins. The aim is to have the bat meet the square ball, without disturbing the opponent. A referee will determine if any exterior circumstances should cause the game to be replayed or if a player should be disqualified. The first player to win 15 points wins the round, and advances to the next round until the final remains.

The Swedish championship in Pong is open for everyone 10 years or older, but you need to sign up in advance through the website. If a great number of people have signed up, the arranger may choose to close the sign up form. Any spare seats to replace those who have signed up but not been checked at the start of the competition, will be assigned at location during Retrogathering.

Winners through the years:

Pong is a digital version of tennis. The aim is to return the ball to your opponent and try to win by making quirky moves causing the ball to take an odd curve. The first player to reach 15 points wins the game, and every duel is worth one point. Pong is considered the first successful video game which created the phenomenon to use a TV to play games. Pong was created by the Atari company and the people behind the idea and programming were Nolan Bushnell, Al Alcorn and Ted Dabney.

But Pong was not the very first game. Instead many people consider Tennis for two by William Higinbotham to be the grandfather. The game was exhibited at Brookhaven National Laboratory during two years, but was never mass marketed.

The first commercial video game for home use rather was Magnavox Odyssey, designed by Ralph Baer. Featuring 12 different games and analogue gaming cards, it was a complex design. It was released in 1972 but never became any major success, according to some sources only 85.000 consoles ever were sold.

The first Pong from Atari was an arcade game, i.e. a large cabinet as often found in shopping malls or pubs. You played by inserting a coin. A test machine was placed at a taverna in California. Two weeks later the owner called late at night to complain about the machine had broken. It turned out the machine was so full of 25 cent coins that it had stopped working! During the first year 1973, close to 10.000 units were sold.

In 1974, Atari began to design a home version of Pong after a suggestion from Harole Lee. Lee, Alcorn and an engineer named Bob Brown became the group to develop Pong for home use. It got the project name Darlene, named after a female employee at Atari. The chip used in Pong was the most complex one available on the market for customer products. Different from Magnavox Odyssey, Pong also had a built-in speaker which said ”blipp” every time you hit the ball.

But after the Magnavox Odyssey failure, the interest for a home version of Pong was low, despite the success of the arcade game. In 1975, Atari eventually managed to attract an interested investor, Tom Quinn at the Sears store chain. After a couple of meetings with Bushnell, Quinn ordered 150.000 units for the Christmas sales. Pong then became the most popular product in Sears’ Christmas catalog that year.

Home version of PONG, to the left Atari’s own version and to the right the Sears branded one

The interest for Pong games kept growing. Several other manufacturers made their own versions, including the Swedish company Luxor. The success was maintained for a few years, until video games with exchangable cartridges such as Fairchild Channel F and Atari VCS were launched. At that point the games industry had reached a new era and the demand for Pong dropped quickly..

Before Pong, Nolan Bushnell and Ted Dabney created what would become the world’s first arcade game, namely Computer Space. It was based on the Spacewar game created in 1961 by the student Steve ”Slug” Russel at MIT. Computer Space was about two duelling space ships and the cabinet was sold in a delicious, candy like metallic when it was launced in 1971.